When 2010 dawned there was no way I would have anticipated it would turn out as it did.  Like most people I had plans of what I intended to do with the year and although I knew they wouldn't all come to fruition and that some unexpected, even unwelcome, events would occur, I pretty much expected a 'quiet' year in which things just plodded along.  Certainly 2010 has been a busy year, and one with some great moments along the way, and it seems right to pause to reflect on a few of the things that have stood out - for good or ill - along the way. 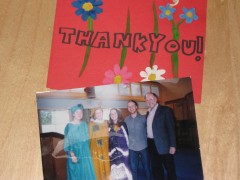 The external event that had the biggest single impact on my year was the news of the death of 24 year old Fay Martin, the BMS worker out in Afghanistan.  The 'thank you card' she sent me the Christmas after her visit to Dibley and the rather crumpled photo of the 2003/4 BMS Uganda Action team taken at Dibley (with the then Midlands BMS co-ordinator) are in my minister's 'treasure box.'  It took a long time to deal with the guilt I felt at having encouraged her to explore God's call on her life, a call that led to her dying so far from home.

The spring months saw me studying with the Scottish Baptist College on their Practice Mentor course - and securing the highest marks I've ever managed for a theology essay.  I guess as a thrice qualified mentor I jolly well ought to have managed this, but it was good none-the-less.  It would be good to say my research work had done as well but for all manner of reasons it didn't - but hopefully early in 2011 I will get to submit for an MPhil adding another set of letters to my collection.  Maybe one day I will get round to the doctorate - time will tell. 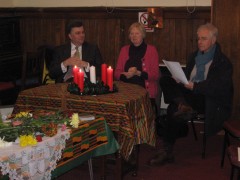 I could wax lyrical for a very long time about church life and bore the pants of anyone daft enough to read my thoughts.  Welcoming new people into formal membership, blessing a baby, leading Lent studies and Advent reflections, watching the Coffee Club flourish, initiating the daytime Bible Study group and the monthly Theological Reflection group, starting to integrate Sunday School themes with preaching plans and going into Sunday School, increasing the number of All Age services... not a bad year's work really!  And all that in addition participating in the existing diverse activities of the church.  The real bonus has been the embryonic work with students that has lowered our average age substantially, increased the number of non-white faces on a Sunday, and energised folk just at a time when things suddenly took a wobble.

The last four months of the year have been very much an unchosen adventure, yet one that has had its lighter moments and it's glimpses of grace.  The climb at Mount Chemo is almost complete - barring disasters the last dose will on 31st December containing this phase of treatment within 2010.  I have learned all manner of things about cancer, chemotherapy, hair growth cycles and the workings of the NHS!  I have discovered good websites and bad.  I have met some lovely people I wouldn't have done otherwise.  I have also learned what it is to be terrified, to wonder 'what if' and to be (reasonably) gracious with the good intentions of people who don't get 'it' or me.  I still have lots of questions about the balance between collusion in the myth of 'happy Christian' and the pastoral responsibilities of being 'honest Christian' (minister or not) which probably won't ever find satisfactory answers.  For me, Mt Chemo has not been too bad and I've been able to continue work pretty much as usual (well, usual at a scant half workload) for which I am very grateful.  The support of church folk, friends and the wider Christian (and not) netowrks has been amazing.  A long way still to go in 2011 - and treatment-wise the bits that really scare me still to come - but this 'new normal' is 'ok'.  (The photo was taken about two weeks ago after I shaved off the last of the "tenacious telegen hairs" that had refused to fall out.  At time of typing I have some 'designer stubble' new growth which may or may not withstand the drugs on Friday; ironically as the stubble began to grow on my head, the last of my eyelashes fell out...)

Lots of other stuff in between, but this post is way too long already.  2010 has seen more extremes than most years, and a fair bit of stuff that never made it in to the public domain that is a blog, but it's a year that still has more to celebrate than to lament.  For what is past, praise God; for what will be, may God be my guide and companion.