Some dates stick in the mind for all sorts of reasons.  September 9th sticks in mine because it was a year ago to the date that I had my hair cut ready to start my cancer treatment.  For twelve months my pigtail has lain, carefully wrapped, in a drawer, except for occasional moments when I've taken it out to remember.  Today I took it out once more, still smelling sweetly of the Fructis shampoo with which it had just been washed, still silky soft, still a reminder of what once was... 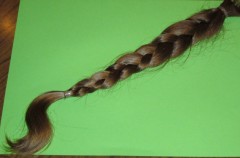 It is now back in the drawer where it will lie untouched for a very long time; it belongs to my past, but a past I choose to remember.

This morning I took a few hold-the-camera-at-arms-length photos:

At the crown it is still a bit thin, and I noticed this week that the hairline has receded a bit at the temples, but basically I have good, strong hair, now about two inches long at its longest bits and, if I'm honest getting to the stage where I will soon have to give in and get it tidied up by a hairdresser :-(

Firstly, has been the responses of other people, which have been many and varied.  I have one very good, longstanding friend who cries whenever they see me because they love long hair and find it hard to see me shorn of mine.  Someone else who has known me all my life, and who I caught up with recently for the first time in almost a year, failed to recognise me with short hair.  Another person told me I look younger, yet another that I looked better with short hair.  Someone perceives my chemo-curls as a blessing from God (no, its called follicle damage) and plenty feel free to tell me I look trendy (some hinting 'for the first time in your life').  If nothing else, all this teaches me to be gracious - people are being kind and well-meaning in whatever they say.  Yes, this is the most 'trendy' I have ever looked but maybe I was happy being 'untrendy'.  Yes, my hair looks fine and I am lucky enough that it suits me as it is, but that doesn't mean I'd have chosen this.  I never really realised just how much we bother about hair, especially women's hair, until this happened and mine starting attracting so much comment.  And because I would never presume to tell someone they look better after a change of hair style, it has bewildered me that others do.

Secondly, I guess is the taken-for-granted-ness.  Although hair loss was a whole body thing, it was only the obvious hair loss that I really noticed.  I recall one day in May standing in the shower and noticing the droplets of water glistening on the tiny, colurless hairs that grow on backs of my arms.  That they had been lost and now regrown I had not noticed.  There was, in that moment, a sense of beauty and wonder - I've never quite seen my right arm in the same way since!  Now that my hair is long enough to be ruffled by the breeze, to protect my head from extremes of cold or heat (or the hardness of raindrops) I am slowly losing the immediacy of what it felt like to need a hat most of the time and the taken-for-granted-ness slowly returns.  Some things have changed in my attitude - when I wake up and look at my mussed up hair I enjoy the moment rather than rushing to make it respectable.

I have no desire to grow my hair really long again - many reasons, it would take several years, it is now considerbaly more grey than it was a year ago (though I am probably one of the few brunettes in Britain whose roots are darker than the ends!) and it would need to go through all sorts of stages to get there.  At the same time, I am not yet ready to settle for (very) short hair either.  Whatever anyone else thinks about its apperance, I will probably allow it to grow for a good while yet (tidying not withstanding) to see how it looks before I settle on a long term style.

What a difference a year makes...