The new Commonwealth Games mega store (read, huge tent-like thingy) is now open in central Glasgow.  I popped in for a browse and emerged over a hundred pounds lighter!  Unlike Manchester, where you could buy kit for all four home nations, for some reason this time it's only Scotland and England - that disappoints me, but that's for another day.

I settled on both.  I will gladly cheer on both these teams (and always would have, as it happens)... and I will also cheer on the underdogs, the back marker in the marathon, the cyclist who struggles along, the athlete in borrowed or outdated kit whose personal best would barely make club class here.

The Commonwealth Games Federation asserts that this is not a competition between nations but between athelets... which maybe means I'm actually closer to the intent in refusing to choose just one nation to support.

Anyhow, if you happen to spot someone with 'We are England' (stupid phrase, imo) and 'Team Scotland' keyrings on her bag, it's probably me!!  Maybe what I actually need is a keyring for Team Fence-dwellers!! 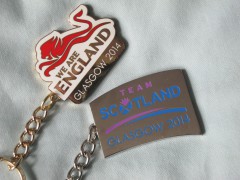